By Mark Prigg For Dailymail.com

Over the last month, a strange thing has happened.

As an overweight, unhealthy 42 year old man, I never thought I’d say this, but I’ve become addicted to spin classes.

And more amazingly, I’ve actually been attending them - even before heading to work in the morning. 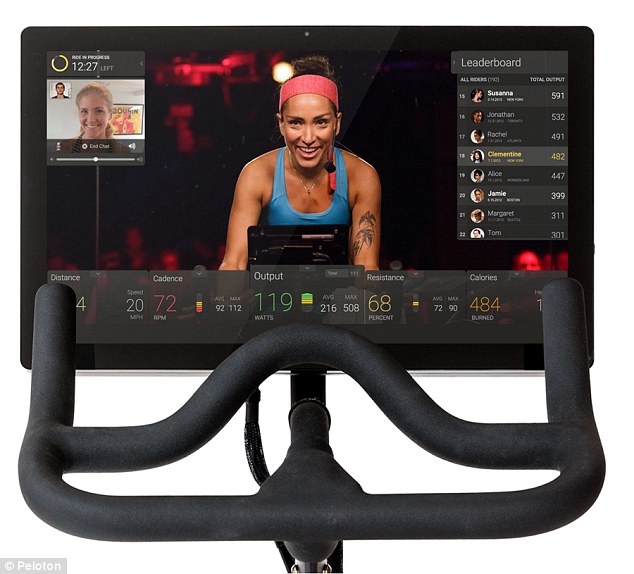 The view from the saddle: Peloton, a New York based hi-tech spin class firm, lets you stream rides live from the firm’s New York HQ, but also access a vast library of on demand rides.

Riders can either use the firm's $1,995 bike with a built in touchscreen and sensors, or an iPad or android app on their own bike.

Classes are either live for from an on demand library.

Classes are either gym based or outside ride recorded using cameras.

Sensors record performance and show live on screen stats and leaderboards with others in the class.

This incredible change is down to one thing - Peloton.

It’s a spin bike with a built 22inch tablet screen built in.

It lets you stream rides live from the firm’s New York HQ, but also access a vast library of on demand rides.

More than this, is also tracks your every move, letting you see exactly how much you’re pedalling, what power you’re putting out, and how you’re doing in an online leaderboard which is either live or made up of other users who have taken the same on demand ride.

This isn’t a cheap bike, costing $1995, with a $39 monthly subscription, and I've been using it for the last month.

One of the most interesting things about Peloton is the breadth of classes available.

It’s astonishing, with everything from the standard dance music you’d expect to 'boomer rides' consisting of only Peter Gabriel tracks, to country and western, heavy metal and classical rides.

There are also a few scenic rides you can take at your own pace and show video of national parks, along with a series of general exercise classes you can watch dealing stretching and warmups.

In addition, there are also live DJ rides, which are at first a little odd, with a DJ booth set up next to the instructor.

However, these do really add to the atmosphere of rides, and became firm favourites with me.

There’s also a big range of instructors, of all age ranges, something that really does help Peloton appeal to everyone - and there are even rides hosted by professional cyclists (which are as absurdly tough as you'd expect).

Once you’ve started a class, you’ll see live stats in front of you on a dashboard, and the instructors will often tell you exactly what these should be.

Unlike a normal spin bike, Peloton’s has a digital resistance control - so there’s no more cheating by not turning it up when you’re told. 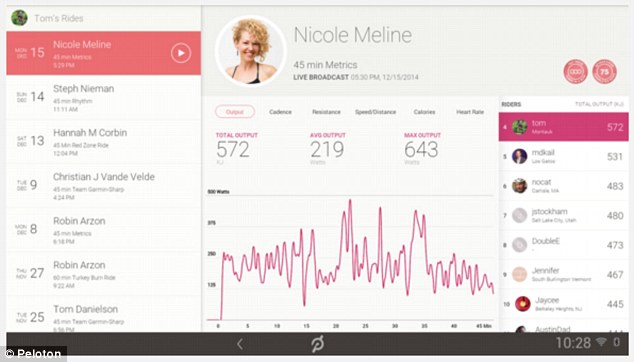 After each ride, you can see your stats - and how you've (hopefully) improved over time.

It’s a strange experience at first - but breathtaking how quickly you forget where you are, and become immersed in the ride.

It really is like being in the studio, and in many ways better than most spin studios, as you’re seeing so much data about your ride (and if you don’t want to, any or all of it can be hidden with a tap).

If you have friends with bikes, you can even see them live on screen, and compete with them during classes.

The key to Peloton is its sense of community - after a few weeks, I developed my favourite instructors and rides (for the record, the 45 minute live DJ rides with DJ John Michael Di Spirito and Nicole Meline became my go to). 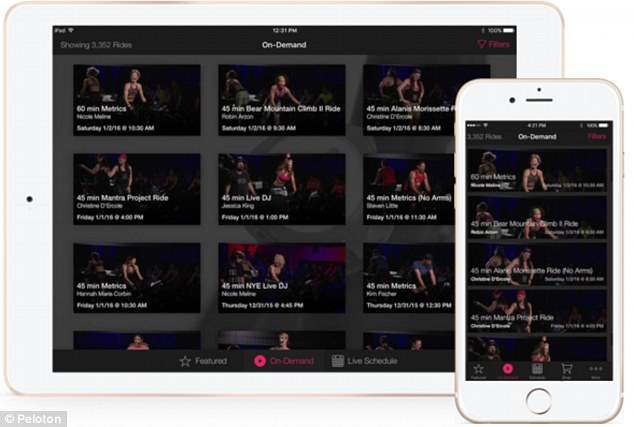 One of the most interesting things about Peloton is the breadth of classes available. It’s astonishing, with everything from the standard dance music you’d expect to 'boomer rides' consisting of only Peter Gabriel tracks, to country and western, heavy metal and classical rides.

The bike really does turn fitness into a game - there are badges available for rides, with everything from a new high output to a fastest speed.

The bike also tracks and stores every ride you do, and this is an incredibly addictive tool - and I found after a month, my numbers were significantly improved.

Overall, the Peloton experience really is a perfect example of how technology can be used to change people’s lives.

Click below to watch a live ride in action

Founder John Foley told me he set the firm up after realising he didn't have time to go to the gym.

'My wife and I have 2 kids, we loved the gym, and missed going - it became harder and harder to make it there.'

'We built a platform to allow people to take that class at home.'

It is, however, expensive.

But with the average spin class, in Manhattan at least, costing around $35 a week, and gym memberships running to hundreds of dollars a month, it’s an investment that does pay for itself relatively quickly, at least if you use it regularly.

And I found I did - I'll be honest, I assumed after a few weeks the bike would be doing double duty as a clothes horse in my spare room.

In fact. I'm was getting up early to sneak in 30 minute classes before work, something I never thought I’d be doing.

The sheer convenience is the key, and the entire experience really has had an impact on my health in a way I didn’t expect.

It's an awful lot of money for a spin bike - but for many people, it really could change you life for the better.

The first that strikes you about the Peloton bike is the sheer engineering quality of it.

It’s incredibly well designed to fit into a home environment, looking rather like the kind of spin bike Batman would use.

It’s also, I was shocked to find, virtually silent, due to its magnetic drive - a godsend for your neighbours as well.

The screen is actually a 22inch Android tablet - but you’d never know this.

Yong Feng, Peloton’s co-founder and CTO, explained this was a hard decision to make - after all, why not simply pop an iPad on the bars. 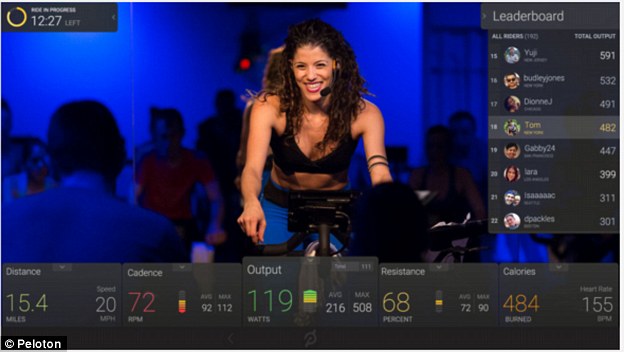 The bike tracks your every move, letting you see exactly how much you’re pedalling, what power you’re putting out, and how you’re doing in an online leaderboard which is either live or made up of other users who have taken the same on demand ride.

‘The decision to build our own was not easy - we have a perfect tablet out there called the iPad.

‘We tried it out, and we realised while the quality is great, the screen and speakers don’t really cut it for what we wanted, and integration with all of the bike’s sensors was also problematic.’

What the firm did instead was build its own tablet, a decision which allowed the firm to control everything about the device.

What they decided on is a 22inch screen, hardwired into the sensors on the bike, and able to communicate wirelessly with a heart rate monitor and bluetooth headphones.

The Peloton app is simple, and superb - and locked onto the tablet, so at no point are you able to run your own apps. 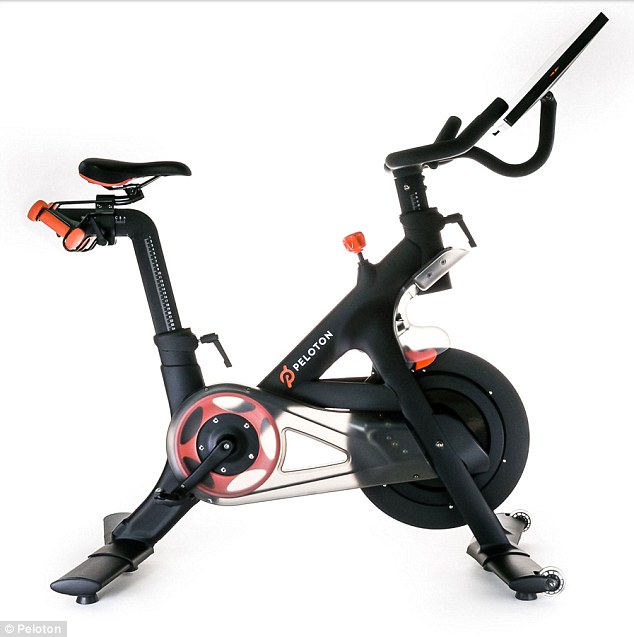 The $1995 bike has a belt drive and magnetic resistance,a built in 22inch tablet computer, and can wirelessly link with heart rate, cadence and other sensors.

‘We didn’t want this to feel like an Android app,’ said Feng.

However, the firm does also offer a cut down experience for iOS and Android, which allows you to do Peloton workouts on your own spin bike - but without any of the tracking and stats that really do make a difference.

The key to the whole business is streaming, and as I found, when it goes wrong, it really can ruin a ride.

However, this was a rare occurence (following one update to the bike’s software, I struggled with buffering and video cutting out - but Peloton said this was an issue with a provider, and as I witnessed, it soon disappeared).

The video quality varies depending on your broadband connection, and even on a fast connection, I’ve seen everything from sparkling HD to lower quality video and audio.

However, it’s usually at least as good as an SD video - and most of the time much, much better (as well as wifi, there’s also an ethernet port for a hardwired network connection).

In the firm’s studio, there are four cameras - 3 fixed and one on a track, and rides are usually available in the on demand section within 24 hours.

The hi-tech $2,000 spin bike that really could change your life

No comments have so far been submitted. Why not be the first to send us your thoughts, or debate this issue live on our message boards.