Could the Milky Way's feeding habits unlock the secrets of dark matter? Our galaxy is 'getting fatter' as it 'eats' 12 smaller star systems orbiting within it, astronomers say

Our galaxy the Milky Way is 'getting fatter' as it 'eats' 12 star systems orbiting within it, a new study shows.

These stellar streams orbit the Milky Way like fairy lights around a Christmas tree, they say, before being drawn in by gravity and becoming part of the Milky Way itself.

Stellar streams are the shredded remains of neighbouring small galaxies and star clusters that are being torn apart by our own Milky Way.

They orbit within the galactic halo – the large and relatively dust-free spherical region surrounding a spiral galaxy such as our own.

The properties of stellar streams reveal the presence of dark matter –  the mysterious form of matter in the universe that can't be observed.

Location of the stars in the dozen streams as seen across the sky by the Anglo-Australian Telescope (AAT). The background shows the stars in our Milky Way from the European Space Agency’s Gaia mission. AAT is a Southern Hemisphere telescope so only streams in the Southern sky are observed 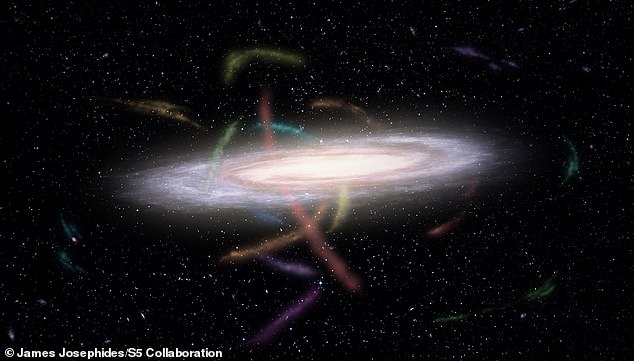 A festive scene: An artist’s representation of our Milky Way Galaxy surrounded by dozens of stellar streams, like fairy lights around a Christmas tree. These streams were the companion satellite galaxies or globular clusters that are now being torn apart by our galaxy’s gravity

A stellar stream is an association of stars orbiting a galaxy that was once a globular cluster or dwarf galaxy that has now been torn apart and stretched out along its orbit by tidal forces.

A globular cluster is a dense ball of about one million ancient stars, all bound by gravity.

A dwarf galaxy, meanwhile, is a small galaxy composed of about 1,000 up to several billion stars, as compared to the Milky Way's 200 billion to 400 billion stars.

'On a dark night, we see the Christmas lights, but not the tree they are wrapped around.

Professor Lewis said the streams have a mix of names based on where they are on the sky and who discovered them – some examples are Phoenix, Orphan, Indus, 300S and Turranburra.

'The streams are formed when small stellar systems, dwarf galaxies and globular clusters, fall into our much larger Milky Way and are torn apart by our gravity,' Professor Lewis told MailOnline.

Understanding stellar streams is important for astronomers as they reveal more about the dark matter that holds the stars in their orbits and can also tell experts about the formation history of the Milky Way.

Dark matter makes up roughly 27 per cent of the Universe, and is invisible because it does not reflect light.

It cannot be seen directly with telescopes, but astronomers know it to be out there because of the gravitational effects it has on the matter we can see.

Stellar streams can also reveal that the Milky Way has steadily grown over billions of years by shredding and consuming smaller stellar systems.

'We are seeing these streams being disrupted by the Milky Way's gravitational pull, and eventually becoming part of the Milky Way,' said lead study author Professor Ting Li at the University of Toronto, Canada. 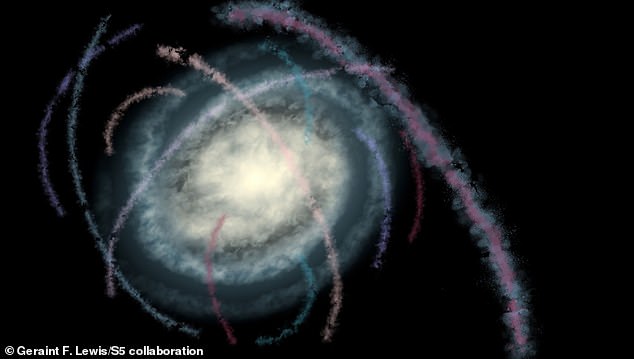 An artist’s impression of 12 stellar streams observed by S5, seen from the Galactic South Pole

'This study gives us a snapshot of the Milky Way's feeding habits, such as what kinds of smaller stellar systems it "eats". As our galaxy is getting older, it is getting fatter.'

Professor Li and her international team of collaborators are part of a dedicated program – the Southern Stellar Stream Spectroscopic Survey (S5) – to measure the properties of stellar streams.

Previous studies that have focused on one stellar stream at a time, but S5 is dedicated to measuring as many streams as possible.

Li and her team measure the speeds of stars using the AAT, a 4-meter optical telescope at the Siding Spring Observatory in New South Wales, northwest of state capital Sydney.

They've employed the Doppler shift of light – the same property used by radar guns to catch speeding drivers – to find out how fast individual stars are moving.

The Doppler effect describes when motion changes the frequency of the sound wave based on the direction of motion of its source, but it occurs for light as well as sound. 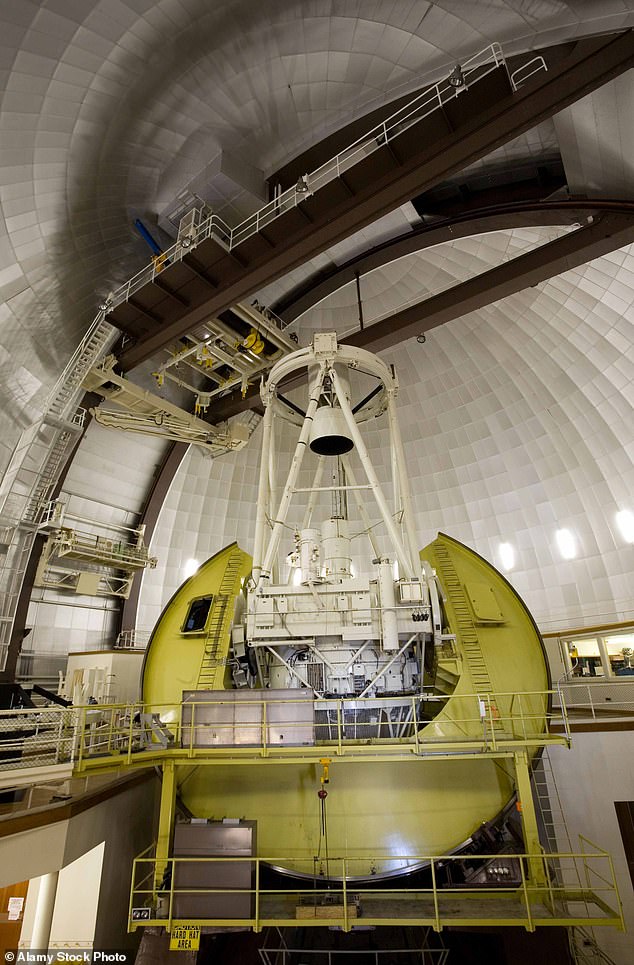 As well as measuring their speeds, the astronomers can use these observations to work out the chemical compositions of the stars and show when they were born.

'The first stars in the universe were made of pure hydrogen and helium, as these were the only elements created in the Big Bang,' Professor Lewis told MailOnline.

'The size of a galaxy dictates how enriched in chemical elements its stars will be – in a big galaxy like the Milky Way, there are lots of stars going through their lives, and its size means that it can hold its heavier elements, whereas a dwarf galaxy has a quieter life and can easily lose it elements when a star explodes.

'So, the level of chemical pollution tells you the size of the object that formed the stream. In our observations, we focus upon measuring the amount of calcium (as that is easiest to observe) which can tell us about the overall pollution, but we can look for other elements also.'

In future, the team plans to produce more measurements on stellar streams in the Milky Way.

The results have been accepted for publication in the American Astronomical Society's Astrophysical Journal and can be viewed as a pre-print.

Dark matter makes up roughly 27 per cent of the Universe, and is invisible because it does not reflect light.

It cannot be seen directly with telescopes, but astronomers know it to be out there because of the gravitational effects it has on the matter we can see.

The European Space Agency says: 'Shine a torch in a completely dark room, and you will see only what the torch illuminates.

'That does not mean that the room around you does not exist.

'Similarly we know dark matter exists but have never observed it directly.'

Scientists are fairly sure it exists and is crucial to the universe, but they do not know what it looks like or where to find it.

Dark matter is thought to be the gravitational 'glue' that holds the galaxies together, while just 5 per cent the Universe consists of known material such as atoms and subatomic particles.

Milky Way is 'getting fatter' as it 'eats' 12 star systems, experts say