Hunt for the elusive 'Asian unicorn': Scientists ramp up their search for one of the world's rarest animals in an effort to save it from extinction

Scientists are ramping up their search for the elusive 'Asian unicorn', one of the world's rarest animals, in an effort to save it from extinction.

Asian unicorn, also called the saola, is native to the mountains of Vietnam and Laos, but it's 'critically endangered' according to the IUCN Red List.

With its long horns and white facial markings, the saola resembles the antelopes of North Africa, but it's more closely related to wild cattle.

The saola was discovered as a species new to science only in 1992, in Vietnam's Vu Quang Nature Reserve, near the border with Laos, based on the animal's remains.

But no biologist has ever reported seeing one in the wild, and it was most recently observed in the wild nine years ago only thanks to secret cameras hidden in trees.

Now, experts at the Wisconsin-based non-profit Saola Foundation are planning new efforts to find the creature, by training dogs to detect saola traces. 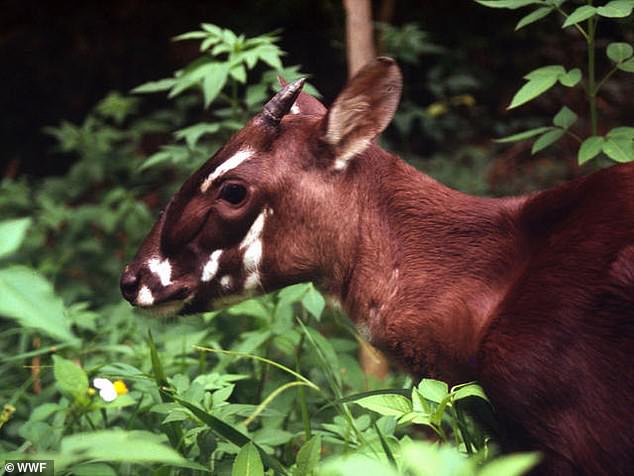 'We stand at a moment of conservation history,' William Robichaud, president of the Saola Foundation, told the Guardian.

The saola or Asian unicorn (Pseudoryx nghetinhensis) is a forest-dwelling bovine found only in the Annamite Range of Vietnam and Laos.

Cousin to the cow, goat, and antelope, the species was defined following a discovery of remains in 1992 in Vũ Quang Nature Reserve.

Despite its 'unicorn' nickname, it in fact has two horns.

Saola stay in mountain forests during the wet seasons, when water in streams and rivers is abundant, and move down to the lowlands in winter.

They are shy and never enter cultivated fields or come close to villages. To date, all known captive saola have died, leading to the belief that this species cannot live in captivity.

'We know how to find and save this magnificent animal, which has been on planet Earth for perhaps 8 million years.

'We just need the world to come together and support the effort. It won’t cost much, and the reward, for saola, for the Annamite mountains, and for ourselves, will be huge.'

Saola (pronounced 'sow-la') are recognised by two parallel horns with sharp ends, which can reach 20 inches in length and are found on both males and females, according to the WWF.

Saola also have striking white markings on the face and large maxillary glands on the muzzle, which could be used to mark territory or attract mates. They are found only in the Annamite Mountains of Vietnam and Laos.

The species (Pseudoryx nghetinhensis) is regarded as one of the most threatened mammals in Southeast Asia, says Edge of Existence.

As part of the Saola Foundation's new initiative, any samples found in the wild suspected to be from saola, such as fur or dung, would be studied onsite DNA test kits.

If the kits return a positive result within an hour, experts would start searching for saola in the forest near to the location of the sample.

If they found any saolas, the creatures would be captured and taken to a breeding centre being developed with help from the Vietnamese government at Bạch Mã national park in central Vietnam. 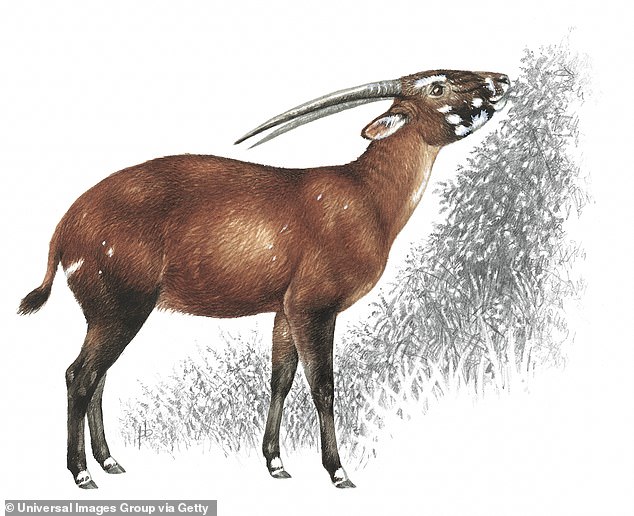 Artist's impression of an Asian unicorn grazing on foliage. Saola are so secretive and so seldom seen (no biologist has ever reported seeing one in the wild) that they have been likened to unicorns

Based on expert opinion and threat assessments, the IUCN thinks there are fewer than 100 individual saolas in existence. Saola Foundation puts this number at potentially under 50.

There are no saolas in zoos and almost nothing is known about how to keep them in captivity, so if the species dies out in the wild it will be extinct.

Saolas are so secretive and so seldom seen that they have been likened to unicorns, despite actually having two horns, as opposed to the mythical unicorn's one horn.

The species was discovered in north-central Vietnam in May 1992 when a joint team of WWF and Vietnam's forest control agency found a skull with with unusually long, straight horns in a hunter's home.

On four follow-up visits, new remains were discovered, including the animal's skin and more bones. In all, researchers examined more than 20 specimens. 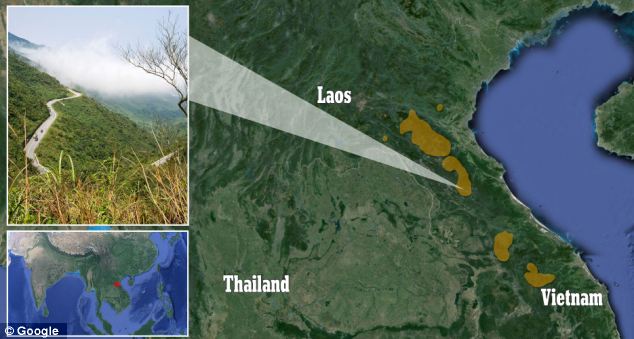 Based on the findings, the species was first described in 1993 by a team of authors including Vietnamese biologist Do Tuoc, who was part of the 1992 expedition.

The discovery was 'one of the most spectacular zoological discoveries of the 20th century', according to the WWF.

In 2013, a saola was photographed by a strategically-placed camera trap hidden in tree foliage in Vietnam's central Annamite mountains.

It marked the first time that the endangered horned creature had been spotted in the wild in the country for 15 years.

In 2010, a saola was captured by locals in a remote region of Laos and the animal sadly died only days later, likely due to being given the incorrect food.

The species eats the leaves of fig trees and other bushes along riverbanks, as well as grasses and herbs at ground level.

The Somali elephant shrew, known for its curiously long snout, has been found in the African wild for the first time in more than 50 years, scientists reported in 2020.

Having been considered 'lost to science' since 1968, the tiny mammal was discovered in the rocky landscape of the Horn of Africa.

Following sightings by locals in the African country of Djibouti, scientists set traps for the critters consisting of peanut butter, oatmeal and yeast extract.

After catching several specimens for further study, the team said the Somali elephant shrew survives after fears it had gone extinct.

The insect-eating creature is neither an elephant nor a shrew, although it's more closely related to the former.

Also known as a sengi, it's a distant relation to aardvarks and manatees as well as elephants, despite being the size of a mouse.

Since being lost to science, just 39 preserved specimens held in the world's natural history museums was the only physical evidence that it ever existed.

The Global Wildlife Conservation group even included it on its '25 most wanted lost species' list.

Scientists ramp up their search for the elusive 'Asian unicorn'

The comments below have been moderated in advance.

What were Earth's five mass extinctions and is the sixth happening NOW? Flooding, drought and wildfires caused by climate change could do as much damage to our planet as a giant asteroid or massive volcanic eruption, experts warn