A SOLDIER'S GUIDE TO LEARNING THE TRICKS OF THE TRADE
The original "no b******t" soldier's handbooks, loaded with tips, tricks and ideas on how to live, thrive and stay comfortable in a military outdoor environment through field expedient know-how. From how to take a dump in the woods, improvise/modify or improve military and civilian outdoor gear, combat survival techniques, reducing field boredom, leadership tips, jokes and much more.

NEWLY REVISED and UPDATED 2012 EDITION
This is the first of two collections that compile all the original 9 volumes into a new 'Complete and Newly Revised Edition'. NOT your typical boring military field manual, these volumes contain info that will keep you one step ahead of your average soldier. Rangers lead the way! This newly revised edition of the first five of nine volumes, adds updated equipment info, new suppliers (now with web links) and much more.

"As a former US Army Ranger, Drill Instructor and Advisor/Trainer to the Bosnia & Herzegovina Army (1996-97) under the US State Department "Train & Equip Program". I have always enjoyed sharing with soldiers my personal experiences, tips, tricks and ideas in how to survive & thrive in the outdoors. And although I've been retired from the United States Army since January 1993, I am still doing what I like best - teaching & training soldiers. But not in a class room but through a series of books called THE RANGER DIGESTS.

Now before I decided to self-publish these books I use to forward all my tips, tricks and ideas to the Department of the Army. But the only thing I ever received back were letters saying, "...sorry, not feasible for military outdoor field conditions." Well since the Army wasn't interested in my ideas, I then decided to write a book about my tips & tricks and try to market them to the troops myself.  After all, when it comes to "common sense" and "field craft ingenuity" the troops know more about this stuff than some "chair-borne" colonel or general sitting behind his nice cozy desk at the Pentagon." 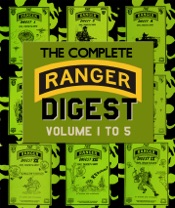