This edition does not include illustrations.

‘Dry Store Room No. 1’ is an intimate biography of the Natural History Museum, celebrating the eccentric personalities who have peopled it and capturing the wonders of scientific endeavour, academic rigour and imagination.

Behind the public façade of any great museum there lies a secret domain: one of unseen galleries, locked doors, priceless specimens and hidden lives.Through the stories of the numerous eccentric individuals whose long careers have left their mark on the study of evolutionary science, Richard Fortey, former senior paleaontologist at London's Natural History Museum, celebrates the pioneering work of the Museum from its inception to the present day. He delves into the feuds, affairs, scandals and skulduggery that have punctuated its long history, and formed a backdrop to extraordinary scientific endeavour from Darwin to the present day. He explores the staying power and adaptability of the Museum as it responds to changes wrought by advances in technology and molecular biology – 'spare' bones from an extinct giant bird suddenly become cutting-edge science with the new knowledge that DNA can be extracted from them, and ancient fish are tested with the latest equipment that is able to measure rises in pollution.

'Dry Store Room No.1’ is a fascinating and affectionate account of a hidden world of untold treasures, where every fragment tells a story about time past, by a scientist who combines rigorous professional learning with a gift for prose that sparkles with wit and literary sensibility.

Note that it has not been possible to include the same picture content that appeared in the original print version.

‘This book is worthy of the place it tells us about, and that is a pretty lofty chunk of praise.’ The Times

‘In this loving survey of his life at the museum, Fortey…is never less than enthused by all the museum's collections.’ Financial Times

‘Fortey…sneaks us behind the scenes with all the glee of a small child seeing for the first time the museum's iconic Diplodocus skeleton. The beauty of the book is that - just like a museum - you can visit the different sections in any order you choose, lingering in the places that most take your fancy … and there is plenty of solid science to enjoy, elucidated with brilliant flair.’ Sunday Times

“There is nothing dry about this exploration of life behind the scenes at the Natural History Museum…Richard Fortey is an amiable, amusing and erudite guide, with a copious supply of anecdotes…Fortey also has a more serious point: that the unglamorous scientific work of taxonomy…is vital not only for the unexpected discoveries it can lead to…but also because it is intrinsically valuable to understand our world during our short stay here.” Independent on Sunday

Richard Fortey spent his working life in palaeontology at the Natural History Museum, specialising in trilobites and becoming a world expert. He was elected President of the Geological Society of London for its bicentennial year of 2007 and is a Fellow of the Royal Society and of the Royal Society of Literature. He has received the Frink Medal, the Michael Faraday Prize and the Lewis Thomas Prize for science writing, as well as the silver medal of the Zoological Society for science communication. He is the writer of eight previous science and nature books, including two Sunday Times bestsellers, all of which are still in print. He has presented many television programmes across the BBC and other channels. 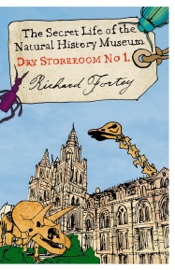