I've always wanted her. After all these years, that's never changed.

I thought Sarah O'Banyon had been The One. I'd been f-ing wrong.

I moved on, made something of myself. Became police chief. Even had a beautiful daughter.

When Sarah buys me at the bachelor auction, I'm stunned. It's been six years. She wants me for something now. When we end up in my bedroom, I know exactly what. Except I get cuffed to my headboard by the sexy mechanic—and left. Getting free isn't the only thing that's hard.

Turns out she's learned something about my past. A secret which makes her angry. I'm okay with that. It means she still feels something for me. I'll change her hate to love.

We're going to pick up the pieces of our first love... and our broken hearts because there is no other option. It's Sarah O'Banyon for this cowboy. Always.

A single dad gets a second chance at first love in the next Bachelor Auction book. It's Huck Manning's turn to reignite the flames on his love life... and your ereader. 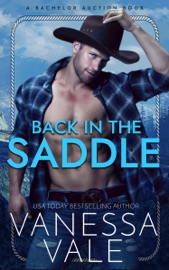