GET READY TO HEAD BACK TO CLASS! Prepare your child for 5th grade with this math workbook full of fun, engaging exercises and activities, designed to refresh kids on what they need to know before returning to school.

Parents, you know that disruptions (whether for summer break, vacations, or other reasons) can put your child's education on pause. By adding just a few pages per day of material learned in the previous grade into kids’ routines, you can help your child keep their skills fresh and set them up success for when they return to the classroom!

The exercises and activities in Get Ready for 5th Grade Math are drawn from our top-selling SUMMER SMART workbook series (designed to combat summer "learning loss"). Inside, you'll find:

With Sylvan Learning, you don’t have to compromise between entertainment and education. Your child will love the great mix of activities, stories, and games in these pages. You’ll love seeing their improved confidence and newfound love of learning! 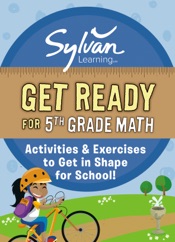