At some 1500 miles long and 250 miles at its widest, the Himalaya range is home to the fourteen greatest mountain peaks on the planet each of which towers over 8,000 metres. Celebrated by the region's early ancient kingdoms, many of these peaks remain sacred in both the Hindu and Buddhist religions and have additionally inspired western explorers and adventurers for some 300 years.

Himalaya examines the geographical origins of the region, its earliest peoples and the onward western discovery and exploration commencing with the Jesuits, progressing through myriad nineteenth century gentlemen surveyors, culminating in Edmund Hilary and Tensing Norgay's ascent of Everest in 1953 and continuing to the present day with extreme mountaineers and adventure tourists. However the book does not solely deal with the attempts to summit the majestic Everest. Its broader brief, and chronological structure, allows the inclusion of narrative and journal extracts from the equally heroic pioneering ascents of Himalayan peaks including K2 (1954), Nanga Parbat (1953), Annapurna (1950), Kangchenjunga (1955), and Lhotse (1956) as well as subsequent new frontiers, peaks, routes and mountaineering techniques.

The volume includes specially commissioned pieces where legendary climbers reflect on their intrepid experiences and heroism on the highest mountains on earth. These accounts are set beside stunning commissioned cartography, historical photographs, newly shot stills of ephemera and artifacts as well as the most recent Himalayan work from some of the world's leading adventure photographers. 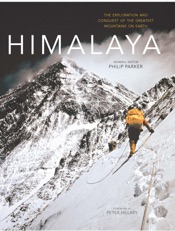