Have a Blast Building New LEGO® Creations That Crash, Crumble, Catch on Fire and Make You Laugh

Gather up your LEGO® bricks and get ready for a wild and fun adventure! Sarah Dees went all out with this new collection of crazy-cool creations you can build at home with bricks you already have. What’s special about this book is that it’s both a storybook and a project book. Follow along the epic journeys of fascinating characters and the silly things they do. Then learn how to build each element of the scenes and characters with step-by-step photographs and instructions, even how to make them look damaged like they get in the pictures. The stories kick off hours of adventurous playtime with all-new, epic space ships, off-road vehicles, mysterious ancient palace ruins, jet skis, cute animals, creepy mutant bugs and more!

Build and play along with three clumsy aliens living on the moon with their space blaster that’s constantly malfunctioning, and the astronauts who become their accidental neighbors after a crash landing. In another chapter, join a group of kids who transport dinosaurs to their modern lives with a time machine they find (and you build). You’ll be rolling on the floor laughing about what crazy mischief those dinosaurs get into! You and your family will have so much fun building these awesome toys and reading the stories over and over again, you’ll never want to leave LEGO® world. 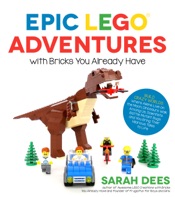 Top Reading The Crown of Gilded Bones On Desperate Ground Malibu Rising Darker Sweetbriar Cottage The Premonition: A Pandemic Story Love's Treasure - A Christian Romance Collection Limited Edition Undercurrent The Lies She Told Tom Clancy Target Acquired Saving Bravo A Kingdom of Flesh and Fire Golden Girl The Other Woman The Last Thing He Told Me Where the Crawdads Sing